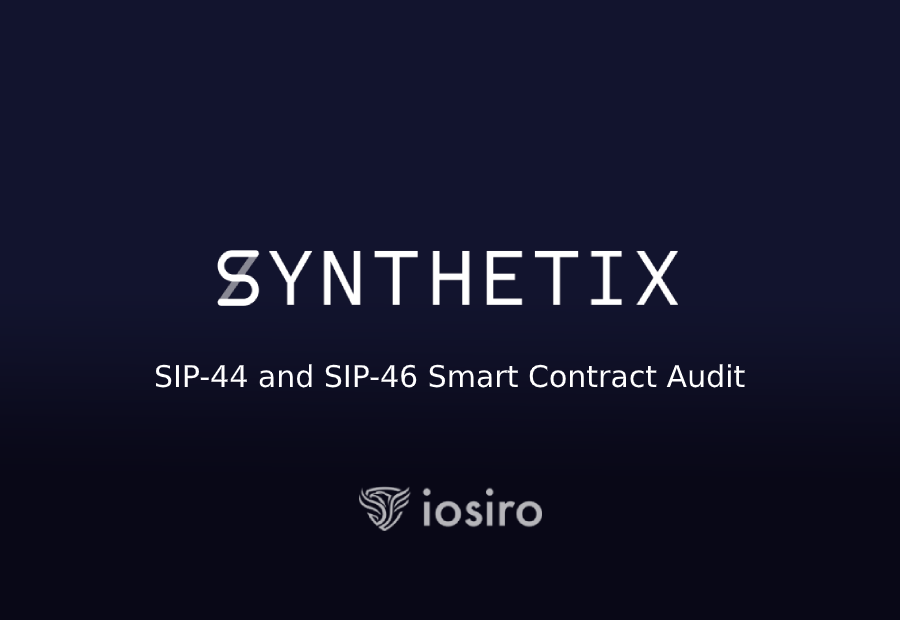 The purpose of this audit was to achieve the following.

The purpose of SIP-44 was to add the ability to suspend and resume certain functionality within the system. Reasons for suspending the system might include system upgrades, issuance and exchange controls, disabling synths for security purposes, or potentially suspending synths during the underlying assets' out-of-trading hours.

The code was found to be of a very high standard, as it was modularised, well-documented, defensive, and generally adhered to best practices. The implementations were found to strictly implement the specifications.

At the conclusion of the audit only one informational issue that did not require further action was open.

A consideration for future developments would be that the suspension controls implemented in SIP-44 were generally implemented in the external functions. Thus it is important that if new functionality is added to the system that interacts with the underlying sensitive internal functions, it be properly locked down. An example of this is `Synthetix.issueSynths(...)` which used `requireIssuanceActive`, exposing `Issuer._internalIssueSynths(...)` to potential misuse.

The contracts were compiled, deployed, and tested in a Ganache test environment, both manually and through the Truffle test suite provided. Manual analysis was used to confirm that the code operated at a functional level, and to verify the exploitability of any potential security issues identified.

The following areas can be suspended:

1. **System**: All synth and SNX transfers disabled. All exchange, issue, burn, claim, loan and mint functionality disabled. This is both for system upgrades and under possible emergency situations.

2. **Issuance**: All sUSD issuance, burning and claiming disabled, along with any loan actions.

3. **Exchange**: All synth exchanges and settlement.

4. **Synth**: For the synth in question, all transfers of, settlement of, and exchanges into or out of disabled.

Access to the above controls will be restricted to an `accessControlList`, a whitelist of addresses that for each section above, can `suspend` and/or `resume`. This whitelist will be managed by the `owner`.

Furthermore, each suspension must include a `uint reason`. Apart from the single reason `1` for `SYSTEM_UPGRADE`, these reasons are purely for dApps and scripts to indicate to users why certain parts of the system are unavailable.

1. Introduce a local `mapping(bytes32 => address)` cache into `MixinResolver` - the functionality included in all contracts that need to communicate via the address resolver

2. Ensure `MixinResolver` is instantiated with a list of `bytes32` addresses that the contract needs to know about

3. Expose a function in `MixinResolver.setResolverAndSyncCache()` to sync the cache. This is to be called each deployment whenever any new contracts are added.

A possible overflow existed in `SystemStatus.suspendSystem(...)` by downcasting a `uint256` parameter to `uint248`. However, the functionality was restricted to only privileged accounts and was not obviously exploitable. As this is was found to be potentially advantageous from a storage perspective, no change is recommended.

The `for` loop in the MixinResolver constructor could `break` once a null address is detected, as long as no null addresses are expected. Doing so would avoid unnecessarily iterating through the full array, which would result in saving gas during deployment.

#### Inline Values Used Instead of Constants

- Synth.sol#L158,162,166,170 use inline strings rather than the constants variables declared in the contract.

- MixinResolver.sol#L16 uses an inline value rather than the defined `MAX_ADDRESSES_FROM_RESOLVER` constant.

FeePool.sol#L242 uses the deprecated `resolver.getAddress(..)` pattern and should be replaced with the caching pattern.

It is recommended that certain portions of the code be refactored to improve readability, as indicated below.

- `MixinResolver.updateAddressCache(...)` should be renamed to `appendToAddressCache(...)`, as it is intended to append another address to the address cache, instead of updating existing entries.

Language mistakes were identified in the comments and revert messages in the codebase. Fixing these mistakes can help improve the end-user experience by providing clear information on errors encountered, and improve the maintainability and auditability of the codebase.