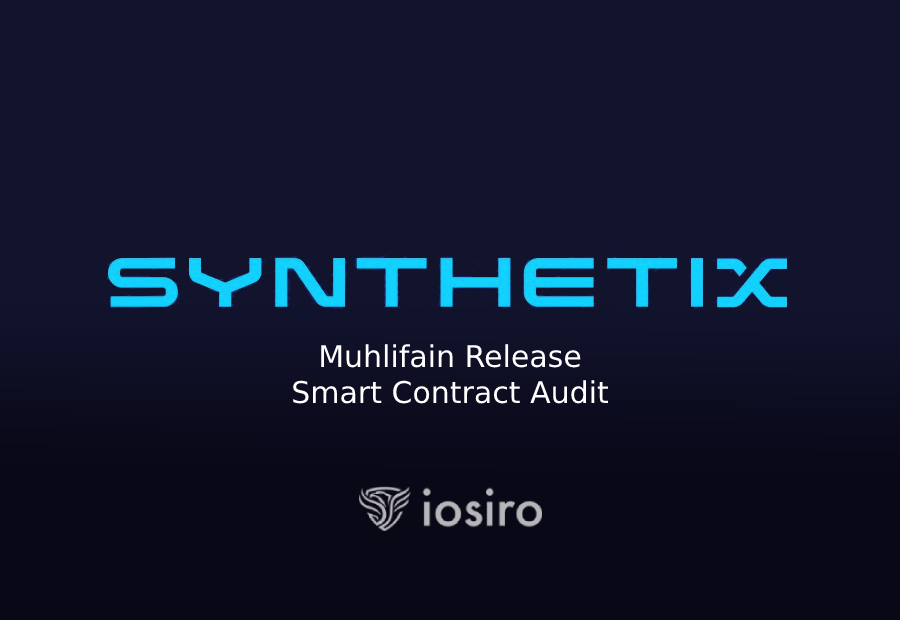 This report presents the findings of a smart contract audit performed by iosiro of Synthetix's Muhlifain release.

[SIP-230](https://sips.synthetix.io/sips/sip-230) iterated on the existing circuit breaker functionality to allow for granular tracking of each oracle, as opposed to a global circuit breaker. The change also enables circuit breakers for any oracle and not only for currency prices.

An initial review was performed while the code was still under active development and feedback was provided on an ongoing basis. No issues were identified in the final implementation of this SIP.

[SIP-257](https://sips.synthetix.io/sips/sip-257) expanded the `ExchangeRates` smart contract to support aggregators with more than 18 decimals. Two informational issues were identified and corrected during the audit.

As part of the restructuring of the circuit breaker logic, the internal call to `_ensureCanExchange` was removed from `ExchangerWithFeeRecAlternatives::_exchangeAtomically`. This would allow users to specify the same source and destination currency, which could result in undesirable behavior. Furthermore, it resulted in the implementations of `exchange` and `exchangeAtomically` to deviate significantly and unjustifiably increased the complexity of the system.

The circuit breaker logic was incorporated into `_ensureCanExchange` and the function was readded to both `_exchange` and `_exchangeAtomically` as per the recommendation in commit [d561f44](https://github.com/Synthetixio/synthetix/commit/d561f44b61d3a20aea838766c8a735591e031987).

The entry's rate value should be used instead of its timestamp:

Functions that implement identical logic, but are kept for backward compatibility should be refactored to use a single shared implementation to avoid inconsistencies. The functions `rateIsInvalid`, `anyRateIsInvalid` and `anyRateIsInvalidAtRound` should also be updated to include the status of the currency's circuit breaker.

The issue was addressed in commit [a6783f3](https://github.com/Synthetixio/synthetix/pull/1813/commits/a6783f37adb77e29b6fda1522f65afad7e08fc8b) as per the recommendations. Each of the affected functions was modified to include the `_rateIsCircuitBroken` check and `rateIsInvalid` was modified to reuse `rateAndInvalid`.

### 5.5.4 Unnecessary use of Safe Math library (informational)
The subtraction operations performed in the `_formatAggregatorAnswer` function were previously validated to ensure that the result was always positive, and as such, the Safe Math library was not necessary in these instances.

### 5.5.5 Improve test quality (informational)
The unit test that tested whether a 27 decimal aggregator answer was valid only performed the test with a 2 decimal value that was scaled up to 27 decimals. To improve the utility of the unit test, it is recommended that a 27 decimal value is used to ensure that the value is correctly set.