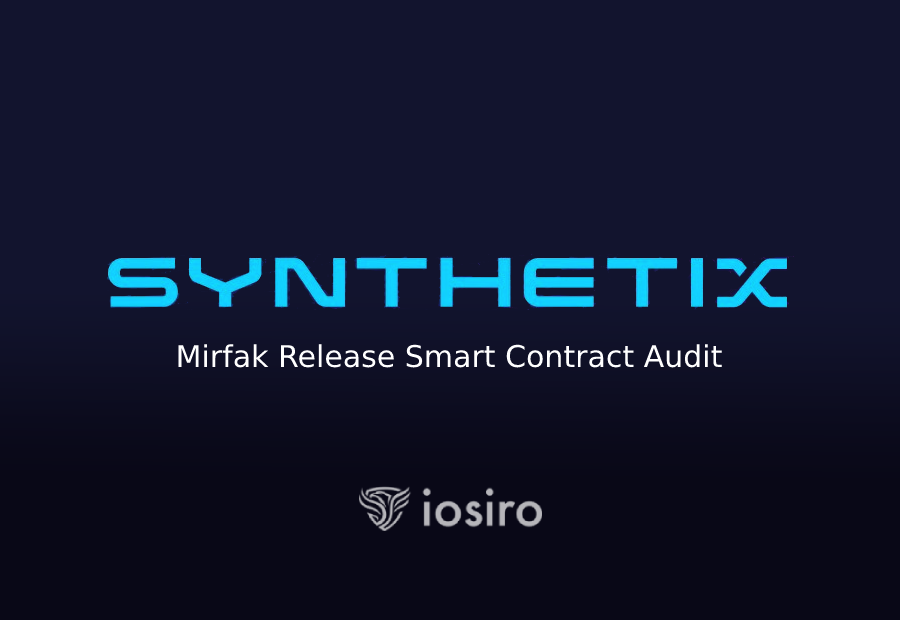 * Security should be integrated into the development lifecycle.
* Defensive programming should be employed to account for unforeseen circumstances.
* Current best practices should be followed when possible.

This report presents the findings of smart contract audits performed by iosiro of Synthetix's Mirfak release.

[SIP-142](https://sips.synthetix.io/sips/sip-142) deprecated the EtherCollateral loan functionality, as it has been replaced by multi-collateral loans. Several informal issues were raised and addressed during the audit.

[SIP-145](https://sips.synthetix.io/sips/sip-145) implemented a bug fix to emit the correct amount of SNX backed debt when taking a full debt snapshot. The code change was minimal and was found to address the issue. No further issues were identified.

[SIP-174](https://sips.synthetix.io/sips/sip-174) introduced a new method for removing synths from the system, without having to purge the synth supply. One informational issue was raised and acknowledged during the audit.

## 3.1 Scope
The source code considered in-scope for the assessment is described below. Code from all other files is considered to be out-of-scope. Out-of-scope code that interacts with in-scope code is assumed to function as intended and introduce no functional or security vulnerabilities for the purposes of this audit.

* **High Risk** - The issue could result in a loss of funds for the contract owner or system users.
* **Medium Risk** - The issue resulted in the code specification being implemented incorrectly.
* **Low Risk** - A best practice or design issue that could affect the security of the contract.
* **Informational** - A lapse in best practice or a suboptimal design pattern that has a minimal risk of affecting the security of the contract.
* **Closed** - The issue was identified during the audit and has since been addressed to a satisfactory level to remove the risk that it posed.

<a name="section-4"></a>
# 4. Design Specification
The following section outlines the intended functionality of the system at a high level.

<a name="section-5"></a>
# 5. Detailed Findings
The following section includes in-depth descriptions of the findings of the audit.

At the time of deprecation, the `totalIssuedSynths` of the mainnet `EtherCollateralsUSD` contract was valued at 1821.26 sUSD due to underwater loans. As a result, removing the contract will increase the overall system debt by an equal amount as it will no longer be excluded from the total debt calculation.

The EmptyEtherCollateral.sol file can be removed as it is no longer in use.

[SynthRedeemer.sol#L79](https://github.com/Synthetixio/synthetix/commit/3a2a3e85e3e1159adb502bf7f174121bf933f4a9#diff-816bc7c59f4ada9fc4cf9427b592505f83d7db82b7f77cb329ef49d47fee044aR79) only checks whether the sUSD balance of the redeemer contract exceeds the value of the total synth value being deprecated, but does not take into account the value of existing deprecated synths. However, this check is not strictly necessary as the issuer contract issues the requisite sUSD before deprecating the synth, so there should be no case where the redeemer does not have sufficient sUSD to be redeemed for the newly deprecated synth.