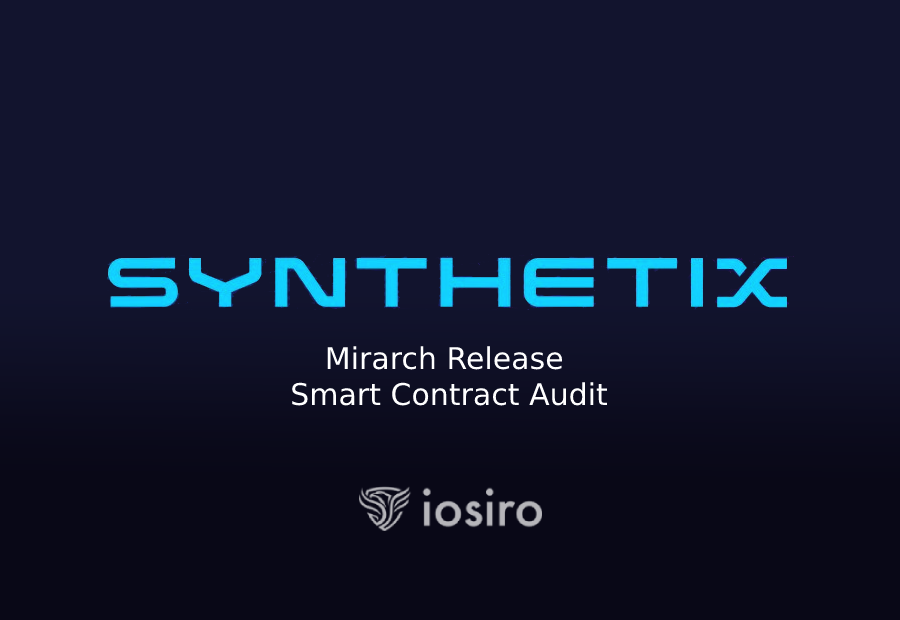 This report presents the findings of a smart contract audit performed by iosiro of Synthetix's Mirarch release.

[SIP-198](https://sips.synthetix.io/sips/sip-198) was introduced to update the atomic exchange functionality to allow trading at pure Chainlink prices for certain synths, as well as to remove the restriction of requiring the source or destination synth to be sUSD.

Two design comments were made, one of which related to adding a slippage control to protect users in the case of a volatile spot price. Both comments were closed by the end of the audit. Overall, the code was found to be of a high standard.

[SIP-222](https://sips.synthetix.io/sips/sip-222) updated the calculation of exchange fees to be the sum of fees for source and destination synths. This was done to account for the different levels of volatility between synths, so an appropriate fee can be charged during an exchange.

No issues were identified during the audit. Overall, the code was found to be of a high standard.

[SIP-229](https://sips.synthetix.io/sips/sip-229) introduced a method for transferring Synths between layers using the Optimism Bridge. One high-risk and one low-risk issue were identified and closed during the audit.

To mitigate the risk of a bug or exploit in either the Synthetix code or the Optimism messenger, a control can be put in place to throttle the rate of issuance of synths. For example, either side of the bridge can issue up to some maximum USD value every 24 hours. This does come with a trade-off for user experience, as traders who wish to transfer large sums across the bridge may need to wait a significant amount of time to move the funds across. Additionally, when the cap is hit other users of the system will not be able to use the bridge.

#### Description
Users should be forced to settle before being able to burn synths when calling `initiateSynthTransfer()`.

#### Recommendation
The `exchanger.settle()` function should be called when calling `initiateSynthTransfer()`.

#### Description
When calling `initiateSynthTransfer()` and `finalizeSynthTransfer()` the status of `synthActive` and `issuanceActive` should be checked to ensure that the synth can be transferred and that the system is allowing the issuance of synths.

As per SIP-120, the synth rates for atomic exchanges is the worst price between a buffered Chainlink price, the Uniswap V3 TWAP price, and the Uniswap V3 spot price. The spot price is taken as the prior block's observed price rather than the current block price to prevent flashloan style attacks. However, a large legitimate trade may swing the price to the downside, leaving the spot price to be chosen as the worst price between the three available options. For this reason, a slippage control mechanism was suggested to ensure that users receive at least a minimum amount out of their destination synth.

[dexPrice](https://github.com/Synthetixio/synthetix/blob/65ddcf75386e79d8a6e658631ce558dbc635b68c/contracts/ExchangeRatesWithDexPricing.sol#L101) and [chainlinkPriceWithBuffer](https://github.com/Synthetixio/synthetix/blob/65ddcf75386e79d8a6e658631ce558dbc635b68c/contracts/ExchangeRatesWithDexPricing.sol#L107) should be renamed to `dexValue` and `chainlinkValueWithBuffer` to indicate that the returned value is the value of the exchange, not the price or rate of a synth.