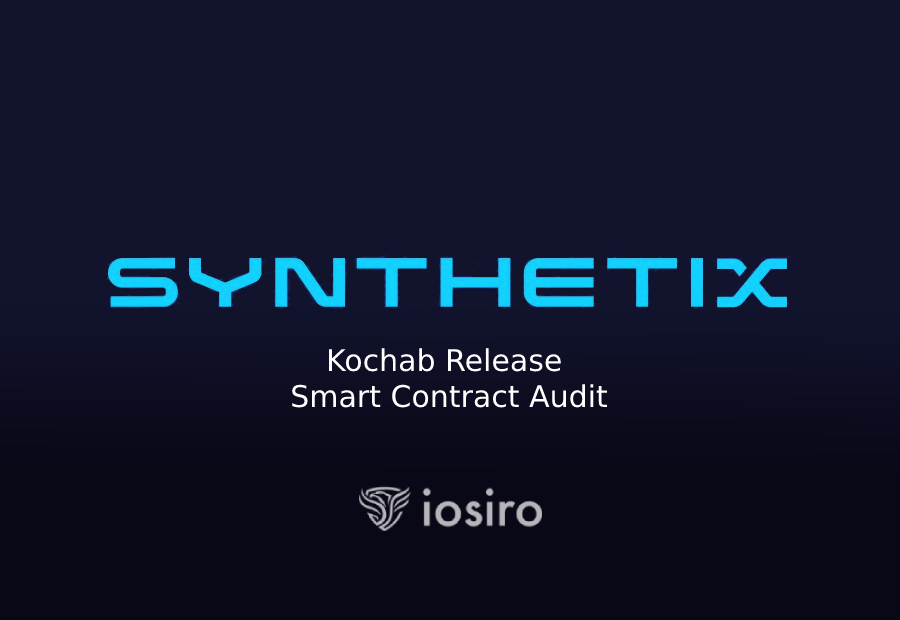 # 1. Introduction
iosiro was commissioned by [Synthetix](https://www.synthetix.io) to conduct a smart contract audit of their Kochab Release, which included [SIP-246](https://sips.synthetix.io/sips/sip-246).

This report presents the findings of a smart contract audit performed by iosiro of Synthetix's Kochab release.

[SIP-246](https://sips.synthetix.io/sips/sip-246) addressed an issue whereby collateral was accumulating in the `CollateralShort` contract on Optimism due to the `_repayWithCollateral` function not burning the collateral used for repayment.

During the audit, it was identified that the manner in which exchange fees were accounted for resulted in users receiving more collateral than they should. This excess collateral could allow a malicious user to drain the underlying collateral from the contract. At the time, the loan contracts had already been paused to address the original issue, so a safe upgrade was possible.

The implemented fix was found to marginally undercalculate the exchange fees but was deemed as an acceptable trade-off to limit the complexity of the changes to the system while addressing the vulnerability.

All issues were addressed by the conclusion of the audit and the implementation was validated to conform to the specification provided.

The contracts were compiled, deployed, and tested in a test environment, both manually and through the test suite provided. Manual analysis was used to confirm that the code was functional and discover security issues that could be exploited.

In `Collateral._repayWithCollateral` the `expectedAmount` was calculated as the amount out minus exchange fees, which was then subtracted from the loan's collateral. This was incorrect as the exchange fee should have been added to the amount, which would result in the collateral being reduced by a larger amount.

By opening and closing large loans atomically an attacker could exploit the issue to drain the contract of all available collateral.

As a proof of concept, the attack was simulated using the following [forge](https://github.com/foundry-rs/foundry/tree/master/forge) test at a block height of 8914432 (chosen because the dynamic sETH exchange fee was greater than the loan issuance fee):
‍

The calculation should be updated to calculate the amount of collateral required to be exchanged in order to receive the repayment amount after fees.

The issue was mitigated in [6445920](https://github.com/Synthetixio/synthetix/commit/644592020aa1d9170d6d4350c4f6777bb5993191). The exchange fee was added to the `expectedAmount` received after exchange. This resulted in the exchange fee being marginally undercalculated; however, it was deemed as an acceptable trade-off between introducing complexity into the system and addressing the vulnerability at hand.

The initial implementation of the SIP removed `_payFees(fee, sUSD);` after calculating the amount of collateral to burn. This resulted in the exchange fees not being distributed to SNX stakers.

Revert the change so that exchange fees are paid to SNX stakers.

Ensure that the collapse fee is applied in `_repayWithCollateral` instead of only in `_closeLoanByRepayment`.

The team opted to remove the collapse service fee in [6445920](https://github.com/Synthetixio/synthetix/commit/644592020aa1d9170d6d4350c4f6777bb5993191). The functions relating to the collapse fee rate in `MixinSystemSettings` and other system contracts were kept to limit the number of contracts that needed to be redeployed as part of this release; however, these functions should be removed in a future release.

The existing implementation of `CollateralShort` remitted the collapse fee using the incorrect currency. This could have resulted in significant incorrect fee amounts being distributed to SNX stakers if the collapse service fee had been set.

Since the loan `amount` is denominated in the loan's currency, the fees need to be converted. This can be done by changing the currency argument passed in `_payFees`, as the function converts the currency internally: