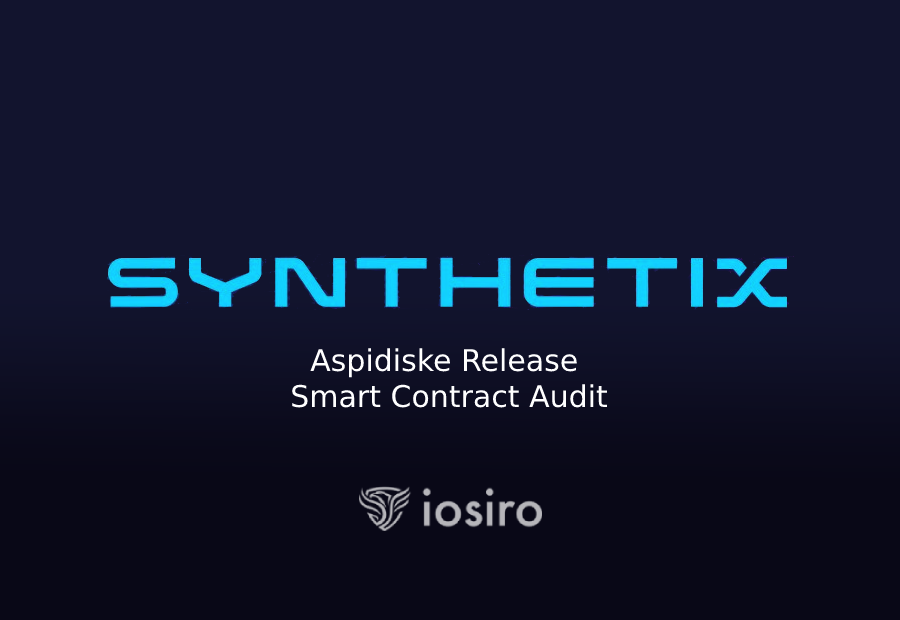 The audit of SIP-252 was performed across the following periods:

A total of 29 resource days were used to audit across this period.

This report presents the findings of a smart contract audit performed by iosiro of Synthetix's Aspidiske release.

[SIP-252](https://sips.synthetix.io/sips/sip-252) introduced a mechanism to allow the liquidation of escrowed SNX in the system when a position's collateralization ratio is below the liquidation ratio threshold. The addition of escrow entry liquidations allows all collateral held by a staker to be liquidated, which further improves the system's ability to maintain its health. Escrow entries can only be liquidated by forced (i.e. non-self) liquidations if the transferrable SNX in a position is insufficient to increase their collateralization ratio to the requisite amount. Furthermore, the liquidator and flagger fee mechanism applied during forced liquidations was updated to improve the calculations of penalizations and in some cases close accounts that were previously left open.

Two high risk issues relating to accounts with Synthetix Escrow and flag removal logic were identified, as well as one medium risk and various other low risk and informational issues. At the end of the audit, the code was found to be of a high standard and conformed to the specification provided.

No informational issues identified during the audit were present at the conclusion of the audit.

#### Description
The implementation neglects that a user could have SNX in the SynthetixEscrow contributing to their c-ratio. When paying out liquidator rewards, the transaction could fail, as the necessary amount of SNX is not liquid. As a result, accounts that fall into this category could be prevented from being liquidated. This issue is also present in the containing `if` statement.[Issuer.sol#L779](https://github.com/iosiro/synthetix-audits/blob/67264e57cee93b49e50ad40c6bacf4d27578b0e1/contracts/Issuer.sol#L779). Furthermore, liquidating an account like this could result in all of its debt being removed despite having additional funds available. One solution would be to perform a partial liquidation in this case, e.g. calculate how much debt was actually paid off and then return that. The problem is only relevant to L1 as L2 does not have escrowed entries in this contract. Around 723,907 SNX is currently unclaimed.

#### Remedial Action
The `_collateral` function should be updated to no longer include the Synthetix Escrow balance held by accounts as a form of collateral.

#### Description
As partial liquidations are possible with self-liquidation (and potentially forced liquidations if the change is implemented), the collateralization ratio of the position should be checked before removing the flag. The risk with this issue is that a user could continuously remove any liquidation flag set on their account by self-liquidating any SNX position (i.e. a non-zero value of `debtToRemove`) that will then reset the flag timer, preventing the account from being liquidated.

#### Remedial Action
Flag removal should be limited to only forced liquidations.

#### Description
A liquidation will revert if the liquidated account has exactly enough collateral to pay the liquidator rewards, e.g. `_collateral(account) = (rewardsSum)` [Issuer.sol#L788](https://github.com/iosiro/synthetix-audits/blob/67264e57cee93b49e50ad40c6bacf4d27578b0e1/contracts/Issuer.sol#L788), or when liquidating an account with all of its collateral in the rewards escrow.

#### Remedial Action
The revert should be replaced by an if statement around the liquidator rewards transfer logic and call to `notifyRewardAmount`.

#### Description
Using `balanceOf` instead of the `_collateral` function results in self-liquidations overcorrecting if there are escrowed entries.

#### Remedial Action
The function should use the `_collateral` function to ensure that the target collateralization ratio is reached after a self-liquidation.

#### Remedial Action
The `totalRedeemed > flagReward.add(liquidateReward)` condition should rather use `>=` to ensure that the liquidator and flagger fees are paid when their sum is equal to the redeemed collateral amount.