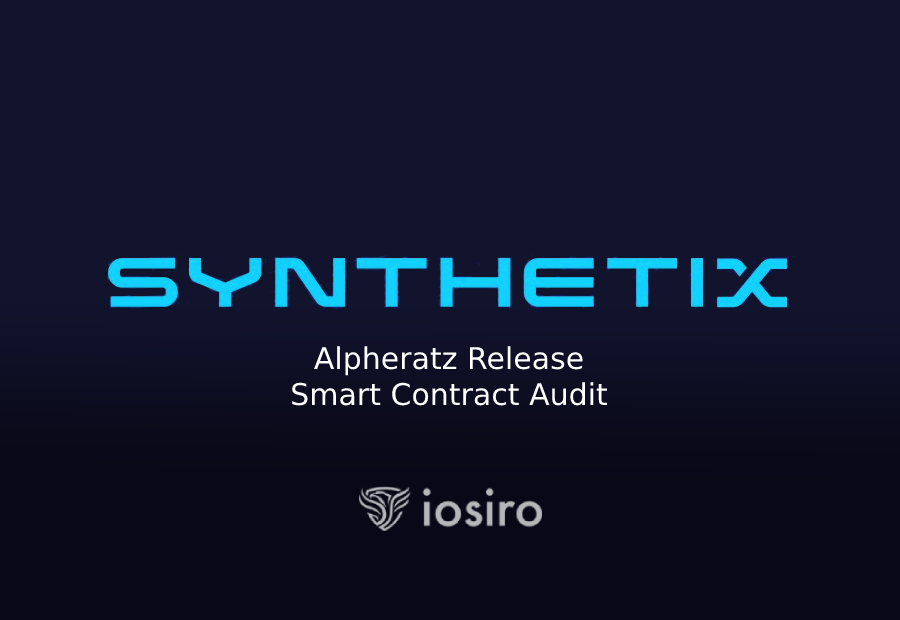 This report presents the findings of a smart contract audit performed by iosiro of Synthetix's Alpheratz release.

[SIP-148](https://sips.synthetix.io/sips/sip-148) introduced a new liquidation mechanism that made the system more resistant to cascading liquidations. The new design redistributes the liquidated debt and collateral to system stakers without requiring the liquidator to burn synths. This allowed collateral to remain in the system as escrowed rewards and mitigated the risk of SNX flooding the market during a cascading liquidation, further dropping the price. Liquidatable accounts can either be self-liquidated by the account owner or can be flagged by a keeper bot. If a flagged account can still be liquidated after some period of time, the account becomes open for liquidation. Flaggers and liquidators earn a fixed SCCP-configurable fee for performing these actions.

One medium-risk issue and two informational issues were identified during the audit; the high-risk issue was closed during the assessment. The code of this system underwent significant changes over the course of the audit, which both simplified the code and improved its quality. The code was of a high standard by the end of the audit.

[SIP-236](https://sips.synthetix.io/sips/sip-236) corrected exchange logic to use the post-settlement amounts when performing exchange calculations.

No issues were identified in SIP-236.

#### Description
When the total redeemed amount from a liquidation is less than the sum of the flagger and liquidator fees, the system sends all the redeemed SNX to the stakers and does not pay the flagger or liquidator. This approach does not adequately incentivize liquidators to perform liquidations against small positions, which would leave them open. These small positions could accumulate as bad debt and jeopardize system health. It should be considered that the system should rather prioritize paying the liquidator and flagger fees, instead of the stakers. In this case, liquidator fees can be given preference as it is the more expensive action.

#### Description
When attempting to liquidate a flagged account that is currently healthy, the flag should be removed instead of reverting to prevent other liquidators from trying to liquidate the account. This will also reset the liquidation timer for the account to avoid the account becoming immediately liquidatable in the future.

#### Description
During liquidation, the system incorrectly subtracted the liquidated debt from the debt cache, misrepresenting the system value on that layer. This discrepancy would be corrected during the next debt snapshot.