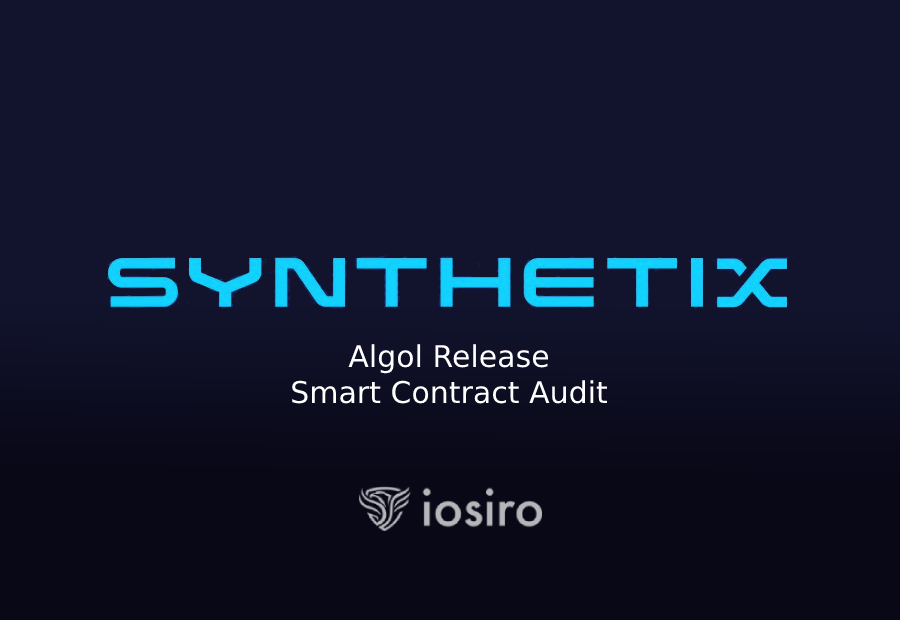 # 1. Introduction
iosiro was commissioned by [Synthetix](https://www.synthetix.io) to conduct a smart contract audit of their Algol Release, which included the following component:
* [SIP-251](https://sips.synthetix.io/sips/sip-251) - performed on 21 June 2022 by 1 auditor, consuming 1 resource day.

This report presents the findings of a smart contract audit performed by iosiro of Synthetix's Algol release.

[SIP-251](https://sips.synthetix.io/sips/sip-251) introduced a new `snxLiquidationPenalty` variable, which allowed for the collateral loans and Synthetix staking mechanisms to have different liquidation penalties.

One medium risk issue and several informational issues were identified and resolved during the audit.

#### Improve test quality
Unit tests were found to use pre-calculated values to validate test outcomes. It is recommended that these values are derived in code to improve readability and maintainability.

#### Code cleanup
The following code changes are suggested for improved code quality:
1. Remove `liquidationPenalty()` from Liquidator.sol as it is no longer used.
2. The [comment referencing SIP-15](https://github.com/Synthetixio/synthetix/blob/d6aefacc436f9c36ea136c9f3d37a5f5f3a170fc/contracts/SystemSettings.sol#L75) should be moved to the `liquidationPenalty` function.
3. The [comment](https://github.com/Synthetixio/synthetix/blob/4b1b1b41598ca2f7f4cfc53e462c718023fe767e/contracts/SystemSettings.sol#L75) describing the collateral liquidation penalty should be updated to reference SIP-97 or SIP-251 instead of SIP-15.

#### Shared upper bound
The [`MAX_LIQUIDATION_PENALTY`](https://github.com/Synthetixio/synthetix/blob/d6aefacc436f9c36ea136c9f3d37a5f5f3a170fc/contracts/SystemSettingsLib.sol#L177) variable is enforced on both collateral and staking liquidation penalties. As these values are independent, it may be helpful to enforce two distinct maximum values.