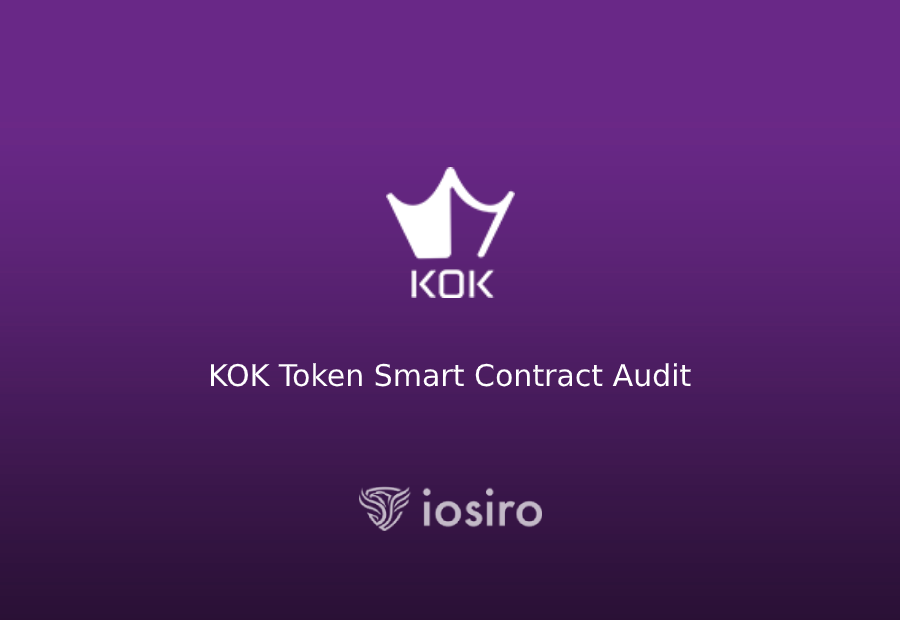 * **[Section 5 - Detailed Findings:](#section-5)**  Detailed descriptions of the findings of the audit.

This report presents the findings of a smart contract audit performed by iosiro on the KOK Token smart contracts. The purpose of this audit was to achieve the following.

Assessing the economics, game theory, or underlying business model of the platform were strictly beyond the scope of this audit.

A variety of techniques were used while conducting the audit. These techniques are briefly described below.

The contracts were compiled, deployed, and tested in a Ganache test environment. Manual analysis was used to confirm that the code operated at a functional level, and to verify the exploitability of any potential security issues identified.

Tools were used to automatically detect the presence of several types of security vulnerabilities, including reentrancy, timestamp dependency bugs, and transaction-ordering dependency bugs. The static analysis results were manually analysed to remove false positive results. True positive results would be indicated in this report. Static analysis was conducted using Slither, Securify, as well as MythX. Tools such as the Remix IDE, compilation output, and linters were also used to identify potential areas of concern.

The KOK Token contract is described below.

The token should implement the ERC-20 standard with the following values.

The token should have an owner address, who is able to perform special operations. It should be possible for the owner to transfer their ownership to another address.

It should be possible for the owner to stop and start all transfers in the system.

There should be functionality built into the token that allows the owner to pass in an array of addresses and amounts to transfer tokens to.

The following section includes in depth descriptions of the findings of the audit.

The `transfer(...)` and `transferFrom(...)` functions returned `false` if attempting to transfer from or to a blacklisted address. While this is within the ERC-20 standard, a more intuitive implementation would revert through a `require` statement. This would prevent third-parties from potentially assuming that a transfer succeeded if the return value of the function was not validated.

The `onlyOwner` modifier returned `false` instead of reverting. It is recommended that a `require` statement be used to explicitly revert if the function is called by a non-owner address.

In the ERC-20 standard it specifies that a Transfer event be emitted whenever there is movement of tokens. On contract.sol#L63, the total supply is allocated to the `msg.sender`, however no event is emitted. It is recommended that an event transferring the tokens from 0x0 to the address be added.

On contact.sol#L25 `ERC20Interface` implies that the code should be an interface, however the `contract` keyword was used. It is recommended that contact.sol#L26 be removed and the keyword changed to `interface`.

The `stop(...)` and `start(...)` functions had an implied public visibility. It is recommended that a visibility is explicitly set on these functions by using the `public` keyword to improve the readability of the code.

The pragma version was not fixed to a specific version, as it specified `^0.4.21`, which would result in using the highest non-breaking version (highest version below `0.5.0`). According to best practice, where possible, all contracts should use the same compiler version, which should be fixed to a specific version. This helps to ensure that contracts do not accidentally get deployed using an alternative compiler, which may pose the risk of unidentified bugs. An explicit version also helps with code reuse, as users would be able to see the author’s intended compiler version. It is recommended that the pragma version is changed to a fixed value, for example `0.4.25`.

In Solidity 0.4.22, the `constructor` keyword was added to avoid this issue. In Solidity 0.5.0 using a function name to indicate the constructor was disallowed entirely.

It is recommended that the constructor be modified to use the `constructor` keyword in order to operate as intended. ([more info](https://solidity.readthedocs.io/en/v0.5.3/contracts.html#constructors))